Portada » News M30 » Did you know that there is a chapel on the M-30 under one of its bridges?
Curiosities in M-30

Did you know that there is a chapel on the M-30 under one of its bridges? 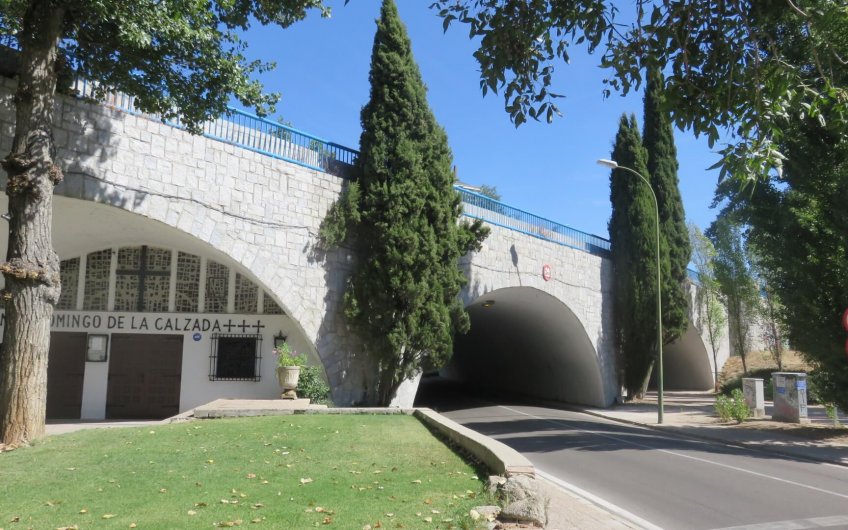 You may be surprised to know that, in addition to a mosque, we also have a chapel on the M30 that is open to worship and where mass is celebrated daily. It is the chapel of Santo Domingo de la Calzada which is also known as the Bridge Chapel.

The chapel is located in the Puerta de Hierro area where Avenida de Fuentelarreyna and Calle Arroyofresno cross. One of Madrid’s best-known residential areas.

Origin and construction of the M-30 chapel

The idea of ​​this chapel came about from the need to provide a church of worship to the area where it is located. However, there were no resources to undertake the construction of a larger conventional church that would have taken longer to build. To cater to the imminent needs of the parishioners, it was decided, as is quite often the case, to make a temporary space available.

The chapel was built and consecrated in 1977 and since then it has been a place of worship. Firstly, as the provisional headquarters of the Parish of the Baptism of the Lord and, once the definitive church was built, as the Chapel of Santo Domingo de la Calzada.

Originality of the chapel located on the M-30

The remarkable thing about the chapel is that its habilitation takes advantage of the arch of a bridge. We use the term habilitation because the chapel was not conventionally built. Only the tunnel formed by the bridge’s arch was used. A 35-metre-long space that forms a half point canyon with a 4.5 m radius.

Only the basic supply facilities were added to this space, two closures, front and rear, constructed with masonry bricks using reinforced plaster mortars and abstract stained-glass windows and terrazzo flooring. The concrete was left exposed and only painted.

This interior, arched throughout its length, and the fact of having only natural lighting, and being located under a public road, means this chapel has certain catacomb feel to it. It transports you directly to the clandestine liturgical celebrations of the first Christians in Rome.

A bridge cuts a residential area or a neighbourhood in two. This caused access to be granted on both sides of the tunnel. In this way, the parishioners on both sides didn’t have to make a long detour.

Due to this layout, it was decided to place the altar in an interior point, instead of placing it against the back wall as is usual.

When the M30 came into use, it brought problems with leaks and humidity in the chapel with it. It almost ended up being closed. However, it was decided to carry out a major renovation of its interior.

The project was carried out with the construction of an interior cover that hides a water drain. These are channelled to four drainage wells.

Currently the chapel, built in the arch of a bridge and in the form of a catacomb, has a modern and harmonious look and is still used as a place of worship. It is definitely worth a visit.